As you might have guessed, blogging is not an important activity for me.  So I will be ending this blog today.  No more post.  If you are interested in my art, please visit my web site at www.backcreekgallery.com.   Thank you for your support over the past few years.   Best of luck to you in the future.

I can see that I'm keeping to my blog posting schedule about one per quarter.  I just don't want to put stuff here that isn't interesting.  How many blogs do you read that are a rehash of everyday happenings? 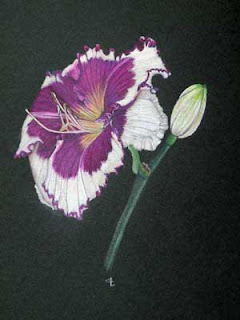 I am back to working on documenting my daylily garden.  This variety is called Sabine Bauer.  It's about 6 inches across with a dark eye and ruffled edges.  It has one of the largest eyes that I've seen in daylilies.  I did this one on dark green Daler-Rowney Canford paper. (It photographed so dark that it looks black)  Not sure I like the Canford paper.  It's difficult to get an even layer of color on it.  It would be nice for graphite, chalk or charcoal sketching.  This piece is 8 1/2 by 11 inches.

My work titled "Looking to the Past" was juried into the CPSA 20th International Exhibition.  It will be on exhibit  at The Carnegie, Visual and Performing Arts Center, Covington, KY (near Cincinnati) from July 9 - August  3 (about six weeks).  Awards will be announced July 9 -12.  I am very pleased to have been selected.
.
Posted by Jan Pope at 5:40 PM 1 comment:

I've joined imagekind.com.  You can see my gallery at http://janpope.imagekind.com.   You can now purchase prints of my work on paper or canvas, framed or unframed at reasonable prices.

Thanks to Nicole Caulfield and her recommendation of imagekind.com as a site for prints and to sell your artwork.
Posted by Jan Pope at 11:53 AM No comments:

Down to the picky parts...

No, I haven't fallen off the end of the earth.  Just been busy with other things.   Sometimes, life yanks you back down to reality. 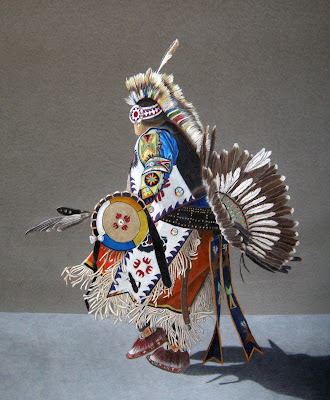 This is my latest work.  Last summer, I attended the NC powwow at the museum of history.  The native Americans of NC were well represented.  There was a Chief's walk which was a kind of dance and prayer asking for wisdom.  This is the Cherokee chief (maybe?).    I loved his ceremonial dress - so much color.  You can't tell it from my work, but all that white area was actually beaded.  I'll bet this weighed a good thirty pounds when worn.

I'm still working on the picky parts.  I fixed the studs on his belt after I took this shot.  I noticed that the middle ones were out of line.  I've added a bit more highlights to some areas. It's just those final touches.
I plan on entering this in the CPSA International Competition.
Posted by Jan Pope at 11:55 AM No comments:

I'm working on a new piece and having some problems with composition.  After several hours of sketching in an element and then erasing it, the thought hit me that I could be drawing on my computer and erasing by "un-do"ing. Much easier than constantly erasing.    Here is what I came up with: 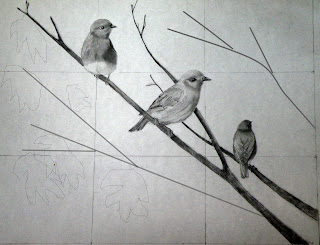 I used Paint.net which is an excellent free drawing and graphics program from the University of Washington.   You can see where I've put in limbs and leaves.  (It's kind hard to draw those leaves with a mouse!)  However, this method was much quicker than drawing by hand.

Now I'm adding in the limbs and leaves on my drawing.  I will need to do gray-scale of the main images to work out the lights and darks.  Everything but the background will be done this way.

I like to think of this technique as the digital equivalent of doing thumbnail sketches. 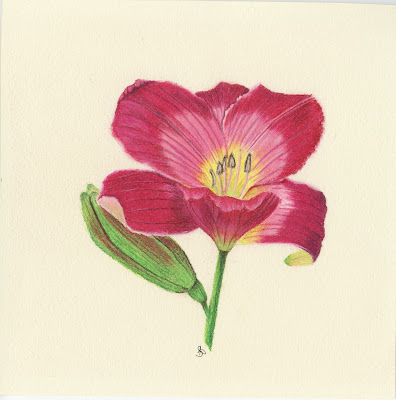 This is  a Munson seedling.  Another one without a proper name.  It definitely should have one as it is quite unusual with it's pink eye and red petals.  It definitely stands out in a crowd.   I had some troubles with this getting the shading right under the front petal.  The bottom of the petal has some green on it and it almost fades into the stem. 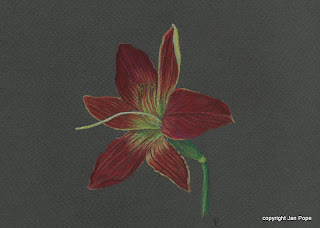 I'm working on documenting my lily garden.  I have around 25 different varieties of day lilies.  That's what happens when you live 3 miles from a day lily farm!  The one on the left is a red spider lily, somewhat different in appearance than the usual day lily form.  It always reminds me of a sunset. 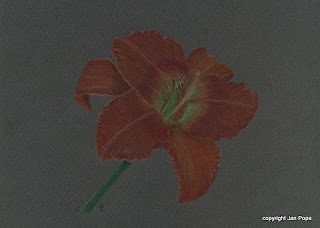 This is Alabama Jubilee.  It's one of a new breed of day lily that has exceptional strong stems.  It stands up through wind and rain.

I'm also experimenting with the new SoHo colored pencils sold by Jerry's Artarama.  They are somewhat harder than Prismacolors.  They have a nice range of colors, especially in the blues and greens.  These pieces were done completely in the SoHo's.

This doesn't work well on the gray paper, so it will probably get drawn again on a lighter shade of paper.

And these are seedlings that don't have a name.  I got them at the day lily farm.  The owner told me that they were seedlings from some crosses he had made and as such, didn't have a name.  But I like them, especially with the white edges.  They are quick to multiple.  After about 4 years, I have an entire section of them in my lily bed.  I think that they might have to be some dividing going on in the fall.

Here are a few other day lily drawings that I did last year when I started this project.
Posted by Jan Pope at 4:29 PM 1 comment:

Welcome to my corner of the art world. This blog is about my journey to become a better artist and live a more creative life.